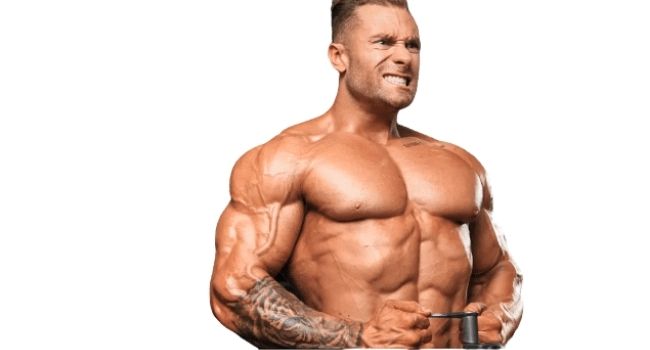 Chris Bumstead has been at the center of steroid controversy since he started getting huge. Some people think that his transformation is due to natural means, while others believe it’s steroids. This article will go over what we know about Chris Bumstead’s natural status, and why you should care if Chris Bumstead is natural or not!

Who Is Chris Bumstead?

Chris Bumstead is a famous person in the online fitness community.

He is a young Canadian bodybuilder. Many people think he has not reached his full potential yet. He is one of the youngest IFBB pro bodybuilders on the planet. And many can see big things in his future.

We are talking about winning many magazine covers and winning in many local sports events. He could be a future Mr. Olympia winner if he continues to progress this way.

Experts think that he could be the next person who is famous, like Dorian Yates, Ronnie Coleman, Jay Cutler, and Arnold Schwarzenegger.

Chris is a really tough guy. He likes being under pressure. That’s why he is so good at contests. He also got his IFBB card when he was younger and has been in lots of magazines because of how great he is at fitness!

Chris has gained a lot of sponsorships, and he is building his social media following. One reason why people are impressed by Chris’s body is that he looks like the guys who were bodybuilders in the 1970s before drugs got stronger.

Off-season he weighs 250 pounds. On-season he weighs 225 pounds while standing at 6 feet tall. He is a popular bodybuilder. People refer to him as a “modern-day mass monster.” His popularity leads people to question whether he is natural or on steroids. Chris Bumstead is a bodybuilder from Canada. He is an IFBB pro.

He was born in 1995, and now he is 26 years old. His nickname is Cbum. Fans call him that name too. He won the Men’s Classic Olympia title in 2019. He is also very popular on social media.

Chris Bumstead is very muscular and has a small waist. He is not as big as Calum Von Moger, but they have a similar body type.

Does Chris Bumstead use steroids?

Chris Bumstead is a pro bodybuilder. He competed in Canada’s bodybuilding federation, CBBF. The CBBF has an anti-doping policy that you can find on their website.

According to the CBBF, their bodybuilders go through a drug test. The organization that they belong to follows the world anti-doping code.

Some people in the bodybuilding community say things like “only a few bodybuilders get tested for drugs in CBBF.”

Now, we don’t know if these claims are real or not. They followed a random testing procedure.

To screen every athlete for steroids is not necessary. The screening is done randomly, so it can be hard to find a bodybuilder who uses steroids. You can’t catch all steroid users with this type of drug testing.

However, on the other hand… If a bodybuilder who uses steroids gets caught, their career can be ruined. The CBBF federation names and shames such bodybuilders on their website.

The world knows that they are not natural. That is how it is. If 10 people take steroids and 1 gets caught, then it is not fair.

What about the other 9? Can they compete? Yes, they can. They can win a trophy. They can get their IFBB pro card. If you see the CBBF “shame page”, you will notice that some people were caught juicing.

This is a common thing among their participants.

Has He Been Tested?

When Chris started as a bodybuilder, he was tested in Canada, in the CBBF.

The CBBF claims to be a natural organization. And in the past, their drug-testing policy was very strict.

In the past, they tested competitors randomly. Now, not all bodybuilders are tested.

Some people have said that some bodybuilders get special treatment and they can cheat. The CBBF only tests athletes when they are not on steroids.

We don’t know if Chris was tested. But he did compete in the CBBF and we never heard that he failed a test.

3D shoulders are a sign in people who take steroids.

People who do not take steroids for bodybuilding will not get a lot of definition on their shoulders. When you take steroids, your shoulder muscles will grow more.

The reason is that your deltoids (muscles in your shoulders) have more androgen receptors. This means they can take up more of the hormone testosterone than other muscles in your body.

When you take steroids, more testosterone is given to your shoulders. This makes them big and solid.

Acne is a common side effect of using steroids. Steroids can mess with your hormones and that can lead to acne.

Using steroids can cause the skin to be oily. That can make the pores in your skin get blocked, which may result in acne.

Chris doesn’t look bad, but if you compare him with a natural lifter of the same age, you can see he often has acne.

People with flushed skin are often people who have used steroids. You cannot hide the flushed skin. It is very obvious.

Steroids can cause your body temperature to go up. This is because they raise your LDL cholesterol levels which increase your body’s temperature.

Steroids make your skin look flushed. When you stop taking them, your skin goes back to normal.

Many people who use steroids have red and flushed skin. But Chris doesn’t look as flushed as other bodybuilders. His chest often looks red though.

So, Does Chris Bumstead Take Steroids?

Based on all of the evidence we have, we believe that Chris Bumstead is using steroids, or, at least, used them in the past.

this is pure speculation. But that is what our guts are telling us in this instance. You can get an idea of whether someone is using steroids by checking how often they go to the gym.

For instance, if a person who has muscles only goes to the gym twice a week and does not work out hard at all, it could be an indication that they are on steroids.

But you must remember that you still have to put the hard work in for your muscles to get big.

Chris has worked out to build his muscles. He has put in a lot of time and effort. Here is how he did it:

Chris has impressive legs. He does exercises for his legs and squats a lot. This helped him play sports better, but he also built himself a great set of wheels as a bonus.

Athletes need to train hard. They also need to eat a good, healthy diet. If they want to be prepared for a competition, they will have a low-calorie diet of 6 meals per day.

Chris eats 7 times per day and consumes around 6,500 calories. This is during the off-season when Chris wants to build muscle mass and size.

He says that 5000 calories come from clean and healthy foods. And the other 1,500 come from less diet-friendly foods.

Before training, he eats a lot of carbs to have energy. As a typical day when cutting, he will eat foods such as:

TAKE YOUR BODY TO THE NEXT LEVEL

No matter what you are training for, CrazyBulk’s legal steroids can help you reach your goal! You should try CrazyBulk supplements to help with bulking, cutting, or getting stronger.